The AGM is open to all members, senior & junior players and their families.

The items of business on the meeting agenda will include Life Member nominations, presentation of financial reports and the election of the following Office Bearer’s for the 2021/22 season:

Nominations are called for the above positions and must be in writing and received by the secretary no later than Tuesday, 14th September 2021.

Nomination forms must be signed by the nominee and two proposers, all of whom must be financial members of the club, Nomination forms are available from the secretary via email to secretary@easttorrens.com.au

We look forward to your attendance, 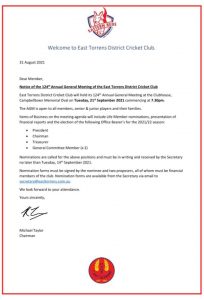